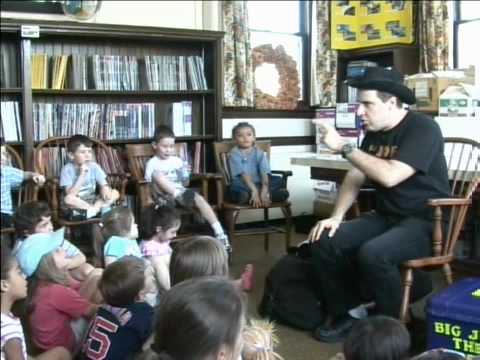 Once upon a time, there was a town filled with not so happy people.  The reason they were not so happy was that they had a giant problem.  Now, I don’t mean that they had a problem that was very big; what I mean is that their problem was a giant!  You see, every morning when the sun rose over the hills, the people would be woken up by the sound of a giant stomping towards their town.  When the giant got there, he would stand in the middle of town and yell, “I don’t want eggs, I don’t want meat, there’s just one thing I want to eat…PANCAKES!”  When the people heard that, they all had to wake up and make lots of pancakes for the giant.  It was the same thing every single morning.  The giant would stomp into town, wake the people up, and the people would have to make him pancakes.  After a while, the people began to get angry.

One night, all the people in town met with the mayor to talk about their problem.  “This has to stop!” they yelled.  The mayor, who wanted to keep the people happy, told them he would think of a plan.  After a whole lot of thinking, the mayor said, “I got it!”  He told the people that when the giant would come to town the next day, what they should do is refuse to make him any pancakes.  The people thought it sounded like a good idea so they went home to wait for morning.

When morning came, so did the giant.  Like always, when he got into town, he began to yell, “I don’t want eggs, I don’t want meat, there’s just one thing I want to eat…PANCAKES!”  When they heard that, the people came out with their arms folded and said to the giant, “We’re not making them!  Not a single one! No pancakes today!”  The giant looked down at them and said, “Oh yeah, Watch this!” He took his big, giant foot, lifted it up, and began to stomp on the ground.  All that stomping made the whole town shake. Dishes fell off the shelves, walls cracked, and trees broke right in half.  Seeing all this, the people put up their hands and cried, “Okay, we’ll make them!” and they went back in and made pancakes for the giant.

That night, they met with the mayor, and they weren’t angry any more; they were furious! They shook their fists and screamed, “This has to stop!!”  The mayor wanted to calm everyone down; so, he told them he would think up another plan.  After a lot more thinking, the mayor said, “I got it!”  He told the people that what they needed to do was tell the giant he wasn’t welcome, and throw him out of their town.  The people were not so sure about the plan, but they figured it was better than nothing; so, they went home to wait for the giant.

The next morning, the sun wasn’t even all they way up when the giant stomped into town and yelled, “I don’t want eggs, I don’t want meat, there’s just one thing I want to eat…PANCAKES!”  When they people heard that, they came out of their houses with a mean look in their eyes.  They pointed their fingers out towards the hills and yelled,  “Get out of town! Leave now! You’re not welcome! Hit the road!”  The giant looked down at everyone and said, “Oh yeah, watch this!”  After he said that, the giant opened his mouth and let out a great big yell.  The sound from that yell was louder than the loudest sound there was.  Windows broke, houses shook, and the people had to cover their ears.  When the yelling stopped, the people put up their hands and cried, “Okay, we’ll make them!” and they did.

When the people met with the mayor that night, they weren’t angry any more and they weren’t furious; they were sad.  The reason they were sad was that they didn’t think there was any way to get rid of the giant.  The mayor told them he would think of a plan, but even he thought it was hopeless.  While he was thinking, a little boy in the crowd named Bobo pulled on his mom’s shirt and said, “Hey mom, I got a good idea, I got a good idea!!” His mom said, “Shhh!” So Bobo pulled harder and said louder, “Hey mom, I got a good idea, I got a good idea!!” and his mom said, “Will you please be quiet!”  The mayor heard Bobo and said to him, “Young man, if you have a good idea, please tell us.”  Bobo went up to the front, stood on a chair and told everyone his plan.  “We have been doing things the wrong way,” said Bobo.  “Instead of throwing the giant out of town or not making him pancakes, lets make him pancakes that don’t taste very good! When he eats them, he won’t like them, and maybe he’ll leave town all by himself!”  The people thought that was a great idea and decided that’s what they were going to do.

When they finished making them, they served them to the giant.  Like always, the giant reached down, grabbed two big handfuls of pancakes, and stuffed them in his mouth.  He started to chew them up, when all of a sudden, he got a really sick look on his face.  The giant’s lips started to quiver, his eyes began to water, and his forehead started to sweat.  When he swallowed his mouthful, he stuck out his tongue and yelled, “YUCK!!  That was disgusting! Those are the worst pancakes I ever ate! You people don’t know how to make pancakes at all!” He looked down at everyone with a mean look and said, “I’m leaving and I’m never coming back!”

When the giant stomped off over the hills, the people clapped and yelled, “HOORAY!”  The giant was finally gone, and they all had a little boy named Bobo to thank.  In fact, they were so happy that the next morning they had a party for Bobo and made him his favorite breakfast which was………………oatmeal!